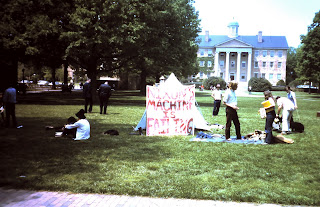 Another snippet from "A Boy From Down East"

What in the world could these three activities have in common?  As I settled into the routine of dorm life at the University of North Carolina at Chapel Hill these became part of the unofficial schedule of events and entertainment.  Each of these events shared a common connector which helped build friendships and enlightened my college experience.


There were five of us who lived next door to each other on the first floor of Graham Dorm.  Since we did not partake of the “evil weed,” alcohol became the libation of choice.  Beer was our favorite but because we were each too poor to buy it on a regular basis, it was reserved for special occasions.  Our fallback drink became wine, Boones Farm Strawberry Hill to be specific.  Occasionally someone bought a bottle of Apple and we all scolded him for not paying attention.


Every Friday night was poker night for any of us who were staying on campus for the weekend.  We met in one of our rooms and set up a card table and played well into the night.  Since we were all card sharks and big time wheeler dealers we had to set a bet limit to 1¢.  If we didn’t, the game would be over after a couple of hands.


One of the rules of play was the bottle rule.  We played until someone won enough hands to be $1.oo ahead.  At this point we took a break from cards and walked up to the little convenience store located on Franklin Street to buy a bottle of Boones Farm for 99¢.  We returned to the game and played until the next dollar was won.


This usually continued until one of three things occurred. First, everyone ran out of money. Since we were college students we had very little money and we were smart enough not to bring all we had to the table. This typically occurred around 1:00 AM.


The second game-ending occurrence was the closing of the little store.  This normally occurred at 1:00 AM.  Allowing for an additional hour to finish off that last bottle of Strawberry Hill we wrapped up the game by 2:00 AM.


The third reason to stop the game rarely occurred but it took a devastating toll on any plans you had for Saturday.  It occurred when the games were played too fast and $1.00 winners happened too often.  This lead to a condition where no one was able to walk to the little store and no one else cared.


Another periodic occurrence that happened several times each semester was the infamous “panty raid.” Usually between 9:30 PM and 10:30 PM a loud clatter of noise arose out on the quad. Guys from the other male dorms on the north campus crossed our quad of 5 male dorms yelling that immortal call to arms, “Panty Raid,” as they marched to Cobb Hall which was an all-female dorm in 1972. By the time they reached Cobb there would be close to 1,000 people in the group.


Whether it was Cobb Hall or one of the other female dorms of the north campus the event played out same. Forget any preconceived ideas or anything you might have seen in a movie about panty raids.


As the crowd began to arrive at the girl’s dorm several campus police vehicles would drive up and park across the street.  Usually three of the largest policemen walked over and one stood in front of each door.  The one at the main entrance would knock on the door and tell the house mother to lock all the doors and first floor windows.  The rest of the police sat on their vehicles and watched the show.


The crowd of guys gathered across the front of the building and began chanting “Panties, Panties.” I know it sounds corny, but no one said guys were smart when animal instincts took over.  The girls gathered at the windows of the upper floors looking out and laughing.  Every so often one would throw a pair of panties out the window and the crowd went crazy. It was like a shark feeding frenzy.  Looking back I realize this stage of the event was similar to chumming the water when you go fishing.


After the crowd was worked up by the occasional panty, the girls moved to the next and most exciting part of the show.  A girl would lean out of the window and dangle a pair of panties teasing the crowd and getting everyone to bunch up in a tight group.  When the timing was just right the girl with the panties suddenly pulled back into the window very quickly.  Before the group below her window could react, four arms came out with a trashcan full of cold water which was dumped onto the group of guys standing directly below.


This process was repeated several times until the crowd got bored and quietly dispersed.
All you could hear as we were leaving was the cat calls and laughing from the dorm and the laughing from the campus police.


As for me and my friends, we only had to see the bait and switch occur once. We were smart enough to stay in the back and avoid the soaking which was sure to come.  We stood there and laughed while we shared our bottle of Strawberry Hill, which one of us always had stashed.


The final activity was the anti-war marches of that time.  In 1972 the Vietnam War was still going on and the anti-war sentiment was very strong on college campuses across the country. UNC was no exception.  By the spring of 1972 the lottery for the draft had occurred and with my draft number I knew I did not have to worry.  In many ways I was very apathetic about the war and to be honest viewed the opportunity to march as another fun thing to do.  And, as I look back most in the crowd felt the same way.


There were two big opportunities I had to participate in anti-war demonstrations that spring.  The first was a big demonstration to be held in Washington, DC.  The activists had put up flyers around campus about the Washington march indicating that UNC organizers were chartering buses to take students to DC to participate.  For $50.oo you got a bus ride and chance to see the nation’s capital, which I had never done.  This was a great opportunity.


I went back to the dorm, called Dad and asked if he could put $50.oo into my account.  I explained I had an opportunity to take a bus excursion to Washington DC and see the sights.  He thought for that price this sounded like a great opportunity to learn about the nation’s capital.  He told me he would get the money together and let me know when it was in my account.


I not sure how but he found out this was a trip to Washington to demonstrate against the war.  When he called me back he didn’t need to use the phone because he was yelling so loud I could have heard him all the way from Aurora.  He proceeded to let me know that if I went on that trip he would pull me out of school so fast I would not know what hit me.  Needless to say I did not get the money nor did I get to go to Washington.


Later, I did participate in a large demonstration held on the campus.  On that particular day my friends and I were out sunning in the quad when we heard and saw a large crowd of people marching by on Raleigh Street. We decided this looked like fun and followed the group, after we grabbed a couple of bottles of Strawberry Hill.  We marched up Raleigh Street, then down Franklin Street and back south on Columbia St. During the entire trip and later as we assembled on the quad in front of South Building there was a constant chant of “1, 2, 3, 4 we don’t want your F---ing War.”


After the march and while everyone was standing in front of South Building one speaker after another got up in front of the crowd and ranted about the war.  The true activists stood in front and cheered them on.


To the rest of us it was just another party.  It wasn't long before this cloud of “funny” smelling smoke began to fill the air and the party began.  As for me and my friends out came the Boones Farm and we joined in.


As you have probably figured out Boones Farm played an integral part in making each of these events a memorable college experience.

This too was part of growing up in Aurora NC.