Naked Eyes - Poetry of Youth by Larry B. Gray 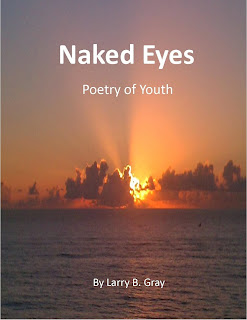 Now Available From Amazon.com and Smashwords.com
Naked Eyes
Poetry of Youth
by Larry B. Gray
The late sixties and early seventies was a time of change in our world. The belief that everything was perfect was coming to an end. America was bogged down in an unpopular war in Vietnam which for the first time was broadcast nightly into everyone’s living room via TV. Between the anti-war demonstrations and the civil rights movement, political unrest was rampant. Drug use was widespread as people tried to “turn on, tune in and drop out.”
The poems in this collection follow no central theme and are random glimpses of my thoughts during this time of coming of age. Each poem has the date that it was written printed at the top of the page and reflects my little world and how I felt at that time.

Click Here to order your copy of Naked Eyes from Amazon.com

Click Here to order your copy of Naked Eyes from Smashwords.com
﻿