Granddaddy -An Excerpt From "A Boy From Down East" by Larry B. Gray 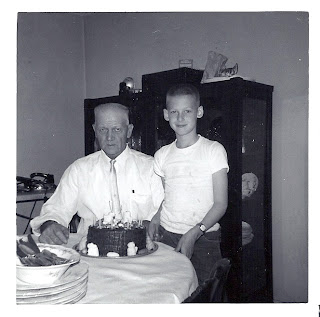 Granddaddy
An Excerpt From My Next Book, A Boy From Down East


I had a special relationship with my grandparents growing up. I spent many hours with them having fun, learning and working on the farm.  Much of the person I am today comes from their teachings and example.  I was blessed to have great parents and grandparents who helped guide me to adulthood.


I idolized my granddaddy and spent as much time with him as I could.  We even shared the same birthday, April 24th. He was born on and I was born on , fifty years apart.  He was born in Bonnerton, N. C.  to Michael Meager Gray and Sallie Stilley Gray and lived his whole life in Bonnerton.


On the day I was born he was transplanting tobacco.  Grandmomma always told me that on the day I was born she told Granddaddy she wanted to go to Washington to the hospital to be there for the birth. He responded, “I don’t have time for all this foolishness; there is work to be done.”  Yes, this was the beginning of that special bond.


He was always working around the farm and house, except on Sunday.  I cannot remember him ever sitting still during the work day.  In the evenings, if he didn’t have to check his tobacco barns, he would sit in the living room and read the paper and it was off to bed early because sunrise didn’t wait for anyone.


He always wore a hat when he left the house whether a clean dress hat to church or an old worn farm hat.  He smoked a pipe and I can still remember his sweet smell of aftershave and pipe tobacco. He kept a cigar box of Tampa Nugget or Hav-A-Tampa cigars in his truck and would smoke them while out in the fields.


When riding around checking on the farm he offered rides to people from the community who were walking and take them to the store or home.  I have seen him go out of his way to drive someone home who did not have transportation. I can remember him telling me “If you want people to help you then you have to be willing to help them.”


It was not until the late 1960s that my grandparents got an indoor bathroom in their house.  I remember Granddaddy bathing at the sink on the back porch and they did not have hot water unless it was heated on the stove.  During the very coldest part of the winter he bathed at the kitchen sink.  He had an old safety razor and powder to make his shaving cream.  Grandmomma made sure we all bathed every night when I was there and at times it was cold.


I can only remember my granddaddy losing his temper twice in my life.  The first time was with me when I punched my brother Mark.  He took me out back of the house and put a belt to my backside.  That was the only time I can ever remember him punishing me and I am glad of that.


The other time I saw him lose his temper was at the cucumber grader at Porters Creek.  After picking cucumbers all day we would load the truck and go to the packing shed to sell them each night.  On this particular night it was late and we were in a long line of trucks waiting for our turn to unload at the grader. I remember I was sitting on top of sacks of cucumbers in the back of the truck watching when another man tried to drive and cut Granddaddy off.  He came out of the truck yelling things I had never heard come out of his mouth and he had a great big old fashion pipe wrench in his hand.  The other men in the area came running over and grabbed him before he reached the guy. They all made the other man go to the back of the line and I can remember one old man saying as he walked by “He should have known not to cut in front of Mr. Willie like that.”


My dad and Granddaddy were active members of the Richland Township Ruritan Club when I was growing up.  I remember each year they had a Father and Son banquet and Granddaddy, Dad, my brother Mark and I always went. It was held in the cafeteria at school and I often wondered how they got such good food out of that kitchen after what we had during the school day.


The other Ruritan event that I attended each year was the annual fish fry at Jarvis Landing.  This was held in the summer and was a lot of fun since many of my friends were there and we would go swimming in the river and play. The fish, slaw and hushpuppies were good also.


When I was in the 7th or 8th grade I remember getting out of school one afternoon and walking up to the pool hall.  When I entered I saw Granddaddy sitting with a group of other men talking and drinking beer. I had never seen Granddaddy with a beer and I remember thinking, “cool,  I bet Grandmomma doesn’t know where you are.”  But, then there was that bottle of whiskey I found in the back of her closet.  When I asked her what it was,  she said cough medicine.


Granddaddy had a sure fire cure for anything that bit you.  If you got stung by a bee or wasp you soon learned to keep it to yourself.  If he found out he would grab you and spit chewing tobacco juice on it.  But now that I think about it, it did take the sting out of the bite.


Another memory I have of my granddaddy is that at night when he was asleep he could snore up a storm.  He would make the windows rattle.  I guess that explained why he and Grandmomma slept in separate rooms.


After I got married and move to Florida Granddaddy would always ask me, each time I went home, why I moved so far away.  I would always answer him, “I looked on a map and saw how far south tobacco grew and I moved 100 miles further south.”  He would always laugh at this but I knew the truth.  He felt the same pains of missing each other that I did.  The funny thing about this little joke we shared is I have spent my entire working career in agri-business.


Granddaddy was and will always be one of my role models and mentors. Some of my earliest memories of life are of the times I spent with him and I have many great memories of us together.